The term translation refers to the work produced by the Translator for the purchaser. The term “Translator” means the party who translates documents. The term “Purchaser” means any party, individual or a client contracting the supply of translation services. The  “Certified Translator” means a Member of the Institute of Linguists or the Institute of Translation and Interpreting (ITI).  The term “Agreement” means the terms and conditions of translation services. The terms “Third Party” means any party who is not party to this agreement.

1. The Translator shall offer a quote/estimate for translation services to the Purchaser which will be based on the clear description of the source material, nature of requirement and the purpose of its use indicated by the Purchaser.
2. The Translator shall not give any quote/estimates until the Translator has seen the source document and is fully satisfied to be linguistically capable of translating the document.
3. An estimate shall not be considered to be a contractual binding for both the parties. The estimate shall remain valid for a period of 30 days from the date from which it was given.
4. The cost of normal delivery of the translation shall be borne by the Translator. The costs for recorded or special delivery shall be charged to the Purchaser and the amount of such charges shall be agreed in advance.
5. Unless otherwise expressly agreed in writing the price estimates shall be exclusive of value added tax and any other taxes or duties which the Translator may be required to collect or pay in respect of the subject translation work.

26. In the event that the Purchaser cancels an order placed with the Translator for the purchase of translation services the Translator shall be entitled to invoice a cancellation charge not exceeding the value of the order completed.
27. No waiver by Translator of any breach of the agreement by Purchaser shall be considered as a waiver of any subsequent breach of the same or any other provision.

28. Any complaint with respect to non-compliance with these terms and conditions shall be notified to the relevant party within 30 days of the date of completion of the translation work.
29. If a dispute cannot be resolve amicably by the parties then the above Terms and Conditions of shall be governed by and interpreted in all respects by the laws of England.
30. Any action arising out of or relating to these Terms and Conditions shall be brought in courts situated in England. 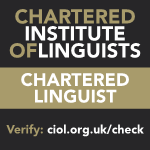